Lifting The Spirit ~ The Grain Train

Every morning at around 8.15am and from our lovely Victorian home here in Newtonmore I hear, emanating from the railway line just 400 metres away, the rumble to the Tesco train. Each day (except Sundays) travelling north at this time and returning south at around 3.50pm the robust engine draws 20 container trucks, each displaying in its side tarpaulins either the name Stobbart Rail or the very clever LESSCO2 in the Tesco colours/decal design. 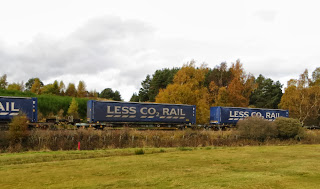 I have to confess to feeling somewhat emotional every time I hear, and in particular when I see, this train go by on the main line between Grangemouth and Inverness. Apart from anything else I take some comfort from the fact that, because of the wisdom of someone in the Stobbart/Tesco organisations, in conjunction with some government support, there are each day, 20 less big trucks moving up and down on the A9 trunk road ~ the major artery which has witnessed far too many deaths, particularly in recent years. Then I start to wonder why other supermarkets and other large organisations are not following the excellent example of Stobbart/Tesco in putting more freight on to our railways.
There has been much deliberation lately on how to tackle the growing number of tragic accidents occurring on the A9. The Scottish Government has now pledged to have the A9 upgraded to dual-carriageway by 2025. Indeed, work is due to start between Kincraig and Aviemore in 2015. However, 2025 is a very long way off with a lot of upheaval and driver frustration between now and then.
Average-speed cameras are also being muted as a method by which accidents rates may be reduced. ‘Average speed’ means just that ~ ‘average speed’. Such a system may work on some UK routes which are already dual-carriageway or motorways, where traffic generally moves along at an ‘average speed’. However, this type of camera system on the A9 could have a very negative effect. Because of the hold ups on the A9 due to slow moving traffic, mainly HGVs, drivers are compelled to drive at a variety of speeds throughout their journey. Thus A9 drivers, having perhaps driven for some time behind a lorry travelling at 40 or 50 miles per hour, to ‘make up time’ and even release potential, pent-up frustrations, once clear of the impediment, may then ‘average out’ their speed by their driving at any rate ~ maybe, even for a time of up to or over 100 mph! The A9 as a trunk road has its faults, particularly the confusing changes in carriageway types. However, bad driving through misjudgements, tiredness, frustration and indeed ‘madness’ must take the blame for the majority of accidents. 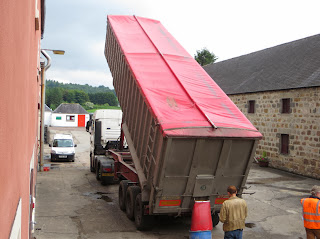 Since, through my Spey Canoe Journeying work, I have become increasingly involved with the whisky industry, I have been amazed by just how many whisky-related bulk-carriers and tankers there are travelling on the A9 and A95 ~ known as the Whisky Road. The bulk-carriers are bringing malted-barley north from places such as East Lothian and Arbroath. Then these lorries take draff south to be converted into cattle-feed pellets. (Draff is the barley husks left over from distilling which still contain proteins.)  The tankers carry new spirit or matured whisky to bottling plants mainly in the Scottish Central-Belt. Some south-bound tankers on the A9 contain pot-ale, a residue from whisky-stills, which provides a highly palatable and nutritious feed for cattle. (There is nothing wasted in the Scotch whisky industry!)

I recent spoke with our local Highland Councillor, Mr David Fallows about the possibility of even the whisky related raw materials and finished products going back on to the railways. (I thought it might be called the ‘Grain Train’ project.) David confirmed that as with the LESSCO2 initiative such transport matter require the co-operation of all the stake-holders ~ the industry, individual companies and the government. It was the advice of our wise councillor that to get up-to-date information on railway freight initiatives I should contact Frank Roach of HITRANS.
Before I got round to contacting Frank, imagine my surprise and elation when, just days after speaking with David Fallows, our local paper the ‘Strathspey & Badenoch Herald’, carried the headline ‘Whisky takes to the rails in pilot project’ ~ relative to the ‘Lifting the Spirit’ initiative.
Designed specifically to reduce lorry numbers of our roads, for the first time since the 1980’s, trains transporting whisky have already been twice a week leaving Elgin station. Each single train = 29 lorries less on A95/A9. The plan is for these trains to carry goods in both directions. HITRANS have secured funding for the project and HIE (Highlands & Islands Enterprise) are investing £30,000. Several Scotch whisky producers are working together on the trial. These include Chivas Bros.; Diageo; Dewar’s; Whyte & Mackay.  pic.twitter.com/m9eWgxwa4Q // www.scotsman.com/...drink/...whisky-trains-trial-1-3092391
This is indeed great news and definitely lifted my spirits! I do hope the ‘Lifting the Spirit’ project is a huge success. Perhaps the ‘Rails to Grantown’ fundraising efforts to extend the Strathspey Steam Railway on past Dulnain Bridge and into the Grantown-on-Spey West Station could gain momentum if the hard-working volunteers could work together with distillers. www.strathspeyrailway.co.uk/dnn/History.aspx  Grantown is also close to Speyside distilleries and, when linked into Aviemore, a more direct route to the Central Belt than even the 200 mile round trip from Elgin via Aberdeen.

Who knows what this could lead to! We have just witnessed the celebration of 150 years of the Perth to Inverness Highland Main Line ~ a great feat of engineering including tunnel and viaduct construction at Killiecrankie and rails laid through Druimuachdar Pass, the highest main line in Britain.
We are soon to celebrate (not!) in 2015 the 50th anniversary of the destruction of the Highland railway network by a certain Dr Beeching. Perhaps it is time to heal some of the gaping wounds inflicted by Beeching’s axe. Maybe as well as rails into Grantown-on-Spey we can see the reopening of the Nethy Spur to the Speyside East line ~ once the major artery pulsing through Speyside for the transportation of barley, whisky, cattle and people. Willie Robertson, the long-time tenant farmer at Ballindalloch, sadly passed away just three weeks ago, regaled me in past with tales of over 1000 cattle (~ stirks, milk-cows, calves, bulls) at a time being sold at the only recently demolished, octagonal, wooden cattle mart at Cragganmore. Once sold the beasts were herded across the road and on to trains bound for the Perth cattle sales.

Great for local industries, including tourism ~ visitors would delight in travelling on, ideally a steam-train
puffing its way through beautiful Speyside, with stunning views of the majestic River Spey. A huge project

perhaps but many of the parts and features of the Speyside line still exist in the form of embankments,

cuttings and even some bridges. And, after all, only a very small percentage of the Speyside Way long-

distance route actually follows the route of the old railway! 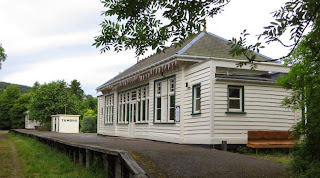 Maybe the ‘Mash Tun’ in Aberlour will indeed, as per its deeds, require to once again be called the ‘Railway Hotel’.
(Sorry, I’ve just woken up. Was I dreaming!?)
Slainte Mhath tae ‘Lifting the Spirit’ project.