Apart from a slight north-easterly headwind, last Wednesday was a lovely, bright day for a canoe trip on the Spey. I met my lovely group actually on the picturesque Old Spey Bridge at Grantown-on-Spey (@GrantownOn_Spey). The trip had been requested by Pam and husband Bill, residents of  Grantown, who wished to share something special (and what could be more special than a trip on the wonderful Spey!?) with two friends visiting from America, before they all went off to share the delights of Pam’s hometown, historic St. Andrews (@VisitStAndrews). With us also were Heather (Assistant Manager) and Kirsty (Wildlife Organiser) from Grantown’s Grant Arms Hotel (@GrantArmsHotel). Recently refurbished, the comfortable Grant Arms has built a reputation for fine dining and owned by a company specialising in Wildlife Watching facilitates a very full programme of evening talks and excursions. 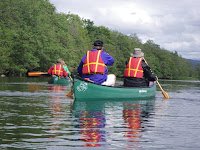 We quickly travelled the few miles upstream and were soon on the water, with my six enthusiastic learners ably practicing effective strokes and manoeuvres by the bridge at Boat of Garten (@boatofgarten). A bridge at this location replaced the ferry, once operated by a fellow with the surname of Garten ~ hence ~ ‘Boat of Garten’. Anywhere on the river where one finds ‘Boat’ as a place name on the map indicates there was once a ferry e.g. Boat o’ Brig, ~ downstream of Rothes, by Auchroisk distillery. At this location a passenger ferry operated across the Spey for several years after the Railway ‘Brig’ was constructed just metres downstream of the existing road bridge. 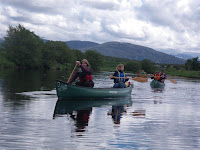 Moving off downstream our little group glided left of the first island, aided by a gentle current. First feature on the left bank in the quaint, tastefully reconstructed meal-mill, complete with water-wheel. Until recently clients on my trip likened the mill garden, with its Alan Titchmarsh-type ‘blousy’ borders, to something you might see on a chocolate-box top. However, major reconstruction, including along the riverbank (looking as if the mill-lade is to be reinstated and the wheel to again turn) has meant the lovely garden is sadly, at least for the moment, no more. 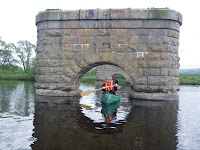 Already my ‘young-paddlers’ are very taken by the variety of birdlife visible close to the river ~ curlews, lapwings (pewits), buzzards and as frequently happens enthralled by how close we pass, as we silently drift by the water-birds ~ dippers, sandpipers, grey and pied wagtails. The section between Boat of Garten and Bailliefurth must be a popular holiday destination for curlews! Nowhere else in Scotland have I ever seen so many of these birds ~ or heard their distinctive (~ so ‘Scottish moorland’) warbling call. Boat of Garten is of course well known as the ‘Osprey Village’ and we not disappointed. Just as we passed below Drumullie, Pam pointed skyward and there flopping its way upstream, passing us river right was one of the local, fish eating, seasonal residents.

A mile or so upstream of Broomhill, rising out of the water, are two impressive granite-built towers. These towers are all that remains of the rail-bridge, carrying the ‘Nethy Spur’ line across the Spey close to where the Speyside East line, coming from Craigellachie joins with Speyside East line, which in turn links up with the main Inverness to Perth route. This picturesque Speyside east line, savagely axed by Dr Beeching as part of his railways rationalisation in the mid 1960’s, was once upon a time was a main artery for the people and industries of Speyside, carrying cargoes of cattle being taken off to Perth market, barley and of course ‘hogsheads’ (large barrels) carrying gallons of whisky ~ now transported to the Scottish Central Belt by the many tankers we encounter on the A9 and the ‘Whisky Road’, the A95. Although sadly, it is unlikely the Speyside East line will ever re-open, the good news is that the authorities are considering developing a railhead at Keith to transport whisky south by train, rather like the excellent Stobbart/Tesco initiative between Grangemouth and Inverness ~ complete with the very clever logo in Tesco colours ~ ‘LESCO2’!

My now ‘expert’ group skilfully negotiate the small rapid running between the stanchions of Broomhill Bridge ~ just along the road from the Speyside Steam Railway station made famous by the television series ~ Monarch of the Glen ~ doubling in the programme as Glenbogle Station. Following the long, flat section meandering passed Boat of Bailliefurth (~ another previous ferry location!), I decide my valiant troops deserve a cuppa. The variety of tea, coffee and hot chocolate was followed by a special treat ~ a small dram of Speyside’s famous handcrafted ‘water of life’ ~ never before tried by our American guests.

Fully refreshed we head off on the last leg of our journey to Grantown. As we glide quietly through the large, wide pool by Craggan Golf Course, an angler who clearly does not comprehend the content or spirit of the Scottish Land Reform legislation, from the bank at least 50 yards away, angrily and loudly declares he is unlikely to catch any fish because we are canoeing on the river! Thankfully all other anglers encountered on our lovely day were very friendly ~ indeed, even pleased to see us.

Cars and whisky lorries moving on the road high on the bank to our left heralded our approach to the ‘new’ Grantown bridge, built in 1931 and carrying vehicles on the A95. Between here and our destination at the Old Spey Bridge we have our most ‘technical challenge’ of the day ~ made a bit more technical because of the peppering of rocks appearing before us because of the particularly low water conditions. All is going well until Pam and Bill clip a particularly large boulder and perform a couple a pirouettes. However, after some pushing and pivoting they slide safely off the rock and join the other boats tucked safely in an eddy by the riverbank. 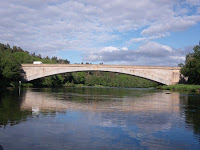 We paddled on down through the last, fun rapid, dodging a few rocks and on under the beautiful Old Spey Bridge to the finishing point of our great day out on the beautiful River Spey. Many thanks to all for taking part but also for your enthusiasm and good humour...