In the first week in May, 2012 thousands of whisky lovers from across the globe gravitated to Speyside ~ the epicentre and spiritual home of Scottish malt whisky production. They were travelling from far and wide to attend the Spirit of Speyside Whisky Festival. Many visitors arrived from within the UK, including locals but others came from as far afield as Canada, the USA, Japan and Australia ~ with the largest majority making the journey from northern Europe/Scandinavian countries, particularly Sweden, Netherlands and Germany. All travelled to Speyside fuelled by their passion for whisky and an unquenchable thirst for greater knowledge and insight into the heritage and culture of Scottish malt whisky.

From early in the morning of the first day (this year Thursday, 3rd May) the Festival programme is jam-packed with events to entertain and further educate this already very enlightened audience. Even before the ‘main event’, in the three days leading up to the Festival there is, based at Knockando distillery, a Whisky School ~ where up to 16 whisky buffs, keen to learn about and appreciate further the finer points of whisky production, are taught and guided by a group of whisky gurus with many years of experience in the industry. 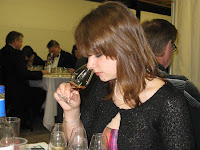 Most of the people planning to attend the Speyside Festival will start to book their menu of events just as soon as the new calendar of events is published ~ normally in January each year. Many will be returning Festival visitors, having been before and coming back for more of the same or similar. That said all are looking for the unusual or unique experience.

The most popular Festival events include the exclusive tours of distilleries not normally open to the public and ‘ultimate' tours of some of the finest whisky distilleries in the world. A popular, fast-filling visit is that to the Mortlach distillery ~ not normally accessible to visitors Mortlach opens its doors for just two days during the Festival and links its tours to the Grouse Inn ~ famous in this case for its outstanding collection of malts available to customers. This year distilleries offering exclusive tastings included Strathisla, Keith and Benromach, Forres.

Whisky and food pairing workshops are also popular. The Balvenie facilitated ‘Whisky & Deserts’ sessions whilst ‘Plough to the Plate’ took participants to view first hand, local agriculture incl. farm-visit, then to retail outlets and on to sample the culinary delights of Speyside in the form of a delicious dinner.

The 2012 ‘Mystery Bus Tour of Speyside’ entailed a journey upstream on the Spey, with a worthwhile stop off at Tamnavoulin distillery and then on to one of our smaller local, very picturesque distilleries ~ ‘Speyside’. Here, tucked away in a secret neuk on the banks of the River Tromie, across the Spey from Kingussie Festival visitors were treated to a very exclusive whisky tasting experience led by the distillery manager Andrew Shand ~ a young man ‘steeped in whisky’. Andrew was born in Elgin, his father having been manager at Longmorn and mother a guide for 20 years at Glenfiddich!

Travelling into Speyside visitors are welcomed to the Festival by large Marrying Tuns placed by the roadside in strategic positions. During the Festival these tuns serve as excellent welcome signs but normally these huge barrels are used by Malt-masters to ‘blend’ together malts of their choice.

My first event experience of the 2012 Spirit of Speyside Whisky Festival was the well organised, fun ‘Whisky Awards 2012’. Those taking part were confronted by 6 anonymous expressions, representing three different age categories. ‘The judges’ (folk like me) were invited to nominate the ‘better’ of the two in each of the categories based upon the nose and taste. I enjoyed very much sharing the competition tasting with @themisswhisky @travelingsavage & #HeinfriedTacke.

The sumptuous Opening Dinner was a truly grand occasion. This banquet for 350 guests was served in The Macallan ‘filling hall’ ~ were normally oak casks are being filled with distilled spirit about to start its process of maturation. The scene was awesome within the filling hall~ over 30 tables immaculately presented ~ pure white tablecloths, topped by polished glasses, shining silverware and huge table-top candelabrum. Also on the table, shining gold in the candlelight were at each place setting 3 whiskies in nosing glasses to compliment each of the dinner courses ~ Tomintoul 12 Y/O for starter; The Glenlivet 12 for main and for desert/cheese an amazing Macallan from 1946 ~ produced immediately following the end of the war, when coal was hugely expensive, the kiln-drying for this particular Macallan had been completed using peat. There were hints of sherry, vanilla and ginger but distinctly smoky ~ almost that of Finnan (smoked) haddock. (I did hear mention of a £5000 per bottle price-tag for the 1946 Macallan!?) 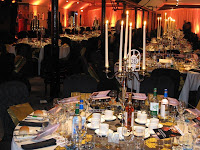 The dinner was superb. All food locally sourced was cooked to perfection and beautifully presented ~ with hot dishes still hot when served ~ a true testimony to the expertise of the staff, especially the chefs. The partnership was outstanding between the caterers ~ Mansfield Hotel, Elgin and The Macallan distillery providers of such a wonderful venue for this grand whisky banquet. Following a wonderful dinner comprising delicious food, wines and whiskies, the icing on the cake was in the arrival on stage of the talented Scottish singer Eddi Reader. Described by many as having ‘the voice of angel’ Eddi entertained the dinner guests with her mix of traditional ballads; upbeat numbers and Glasgow humour, based upon life-experiences. 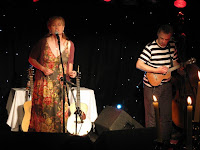 The following evening (Friday) Glenfiddich played host to the Celtic Spirit Ceilidh. Music for that evening was first provided by local young musical talent ~ ‘Cherry Grove’ ~ a five-piece band, who thoroughly entertained those present with a miscellany of mainly their own compositions. Much more than a ‘warm-up’ group Cherry Grove were then followed on stage by the well known band ‘Skerryvore’ ~ who had the place rocking for the remainder of the evening with their very entertaining musical mix, including traditional Scottish tunes and songs. Many thanks to those who helped make this such a special evening ~ Jamie @glenfiddichjm; Darren @thewhiskyguy; Roddy @rodbodtoo and of course Alwynne @themisswhisky. 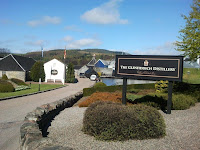 Throughout the daytime during the Whisky Festival visitors disappear off to various corners of Strathspey ~ either as individuals /couples but very often in groups to take part in their chosen activity/ies. Whatever Festival visitors are doing however there is a great sense of friendship and camaraderie between all taking part. Also, the international feel of the Festival is outstanding. At the Opening Dinner I had the pleasure of sharing a table with lovely couples from Montrose, Scotland and from Norway ~ both on their first (but not last!) visit to the Festival. A German couple and Swedish couple had been twice before and now look upon the Festival as an ‘annual event’.

On the day I took the train journey from Dufftown to Keith to visit Strathisla distillery, I travelled with groups from Germany and Netherlands. Already organisers of the Noord-Nederland Whisky Festival I met on that train journey are talking about joining me on a Spey Canoe Journey during the 2013 Speyside Festival! 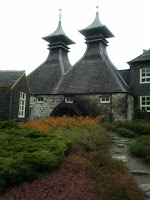 Many congratulations to the organisers of the 2012 Speyside Whisky Festival. Everyone I spoke with at this year’s Festival, from home and abroad, had a wonderful time. Now in its 13th year and growing in stature every year, this Speyside gathering of whisky enthusiasts has become one of the most important whisky festivals in the world. Home to more than half of Scotland’s whisky distilleries ~ where better than beautiful Speyside for whisky enthusiasts to congregate to celebrate and share with likeminded people their passion for world-renowned Scottish produced whisky ~ especially our high acclaimed Speyside malts.