The Spey District Fishery Board (SFB), jointly financed by Government and funding from Spey Angling Estates, has wide ranging responsibilities linked to ensuring the protection, conservation and enhancement of the Atlantic salmon and Sea Trout. The District covered by the Board stretches from Loch Spey, the source of this majestic river 107 miles all the way along the coast to Lossiemouth, plus all the many Spey tributaries, including the Feshie, Nethy, Avon. The SFB area actually extends 3 miles out to sea and SFB Bailiffs deploy a fast (RIB) boat to patrol along the shore for monitoring duties, including looking out for any illegal fishing activities in the Moray Firth off the mouth of the river.

On the main-stem of the river, SFB bailiffs and biologists also make frequent use of open-canoes for their important research work on the river ~ monitoring fish stocks, tagging programmes and sea-lamprey studies, as well as counts of saw-bill ducks (mergansers & goosanders). To ensure staff members are competent, thus safe on the river SFB staff undergo training before undertaking any of the Board canoe-based work.
The day lacked the blue skies and sunshine we had hoped for, however despite the slight mizzle and overcast nature of the day my students arrived at our meeting point at Knockando, well togged up and clearly raring to go. As many of my outdoor activities colleagues say ‘There’s no such thing as bad weather ~ just bad clothing’!

The well maintained station at Knockando, now with the name ‘Tamdhu’ on the traditional sign-boards, is owned by Ian Macleod Distillers who recently purchased the Tamdhu distillery from the previous owners, Edrington. Having been closed for since 2009 Tamdhu started production again earlier this year.
Leaving one vehicle parked by the lovely old station, which was to be our egress-point at the conclusion of our journey, we drove to our start point for the day ~ upstream near Advie on Tulchan Estate. Once we packed our kit for day ~ spares paddles, bailers, dry-bags and of course lunch into the canoes, we had a short ‘land-drill’ session just to cover some essential, basic strokes and we soon on the river ~ slightly swollen by the rain of the previous days and overnight.

Having done a little bit of kayaking previously and short spells on flat water, for these SFB staff this was their first time paddling open canoes on moving water. However, clearly having listened well during our shore-based session, I could see I had star pupils who paddled with instant competence and were keen to learn more.

We soon encountered or first anglers of the day ~ two young men, who were I think slightly startled by our appearance from the upstream mist, as they stood on the bank waving their long wands, as if divining the air for guidance as to the best place for them to start their over-water ballet with rod and line. Smiles and pleasantries were exchanged as our canoes glided silently by. By now hardly even noticing the incessant drizzle, we continued to practice strokes en route and discuss the wonderful miscellany of wildlife close to us as we paddled downstream ~ herons, dippers, wagtails, buzzards and later below Blacksboat Bridge a lovely roe deer doe, grazing close to the waterside, only raising her head to watch us pass her picnic spot. 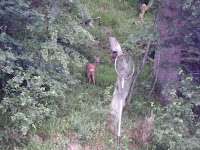 Once into Ballindalloch Estate, from the river one gets a first view of Ben Rinnes. This lovely, most easterly of Moray’s larger hills is situated close to Aberlour. It has towards its summit some significant tors and just by its lower slopes ~ a distillery producing a rather fine malt, bearing the same name as the rather fine hill. When I finish writing this, I may even treat myself to a wee Ben Rinnes in front of the fire.

To our right, hidden by trees, we passed the Cragganmore Distillery and then Ballindalloch Station ~ once a hive of steam-train activity with barley being brought by train to the Cragganmore granary. Hogsheads of whisky from the distillery being loaded into trucks ~ which like the hundreds of cattle bought and sold in the sadly now demolished local cattle mart, would be taken by train along the eastern Speyside line and on to Perth and the Central Belt. Oh! Dr. Beeching what have you done!?

We then paddled beneath the recently refurbished bridge ~ constructed by a Dundee steel company in 1864 to carry the Speyside railway but saw no more trains after 1964, when the said Dr. Beeching brought his axe firmly down upon so many Scottish rural rail routes. However, with its mighty horizontal supporting timbers recently replaced, this bridge now serves as a river crossing for pedestrian travellers ~ walkers, bikers and horses on the Speyside Way.

About a mile downstream of the old rail bridge, rising on the southern side of Cairngorm Mountain, the River Avon contributes to the mighty Spey its waters from the high Grampians. Not visible from the river but just upstream and to the east of the Avon is Ballindalloch Castle the impressive, historic home of the MacPherson Grants. Although open to the public through the summer months, this lovely fairy-tale castle is still the residence of Lady Claire MacPherson Grant and family.

One house we do see clearly from the river is another fine Ballindalloch property ~ Pitchroy House with its pristine white-painted stone work and lovely decorative turrets. Pitchroy House heralds our approach to one of the best known and exciting sections of rapid-water on the River Spey. This piece of white-water is visible from high up on the A95 almost a mile away. Blacksboat Rapid is affectionately known by paddlers as the Washing Machine. My star pupils, however, did not blink an eyelid and expertly guided their craft through the turbulence on this fast water chute ~ which consists just water and air bubbles!

We moved on past Blacksboat Station ~ once the next stop down the line from Ballindalloch. Platform building here is now a house and the bats that used to live in the roof of the waiting roof now have their own custom-built, slate-roofed bat-house! Then we’re under the bridge leading to Marypark, where once there was a ferry (boat) operated by a man called Mr. Black ~ hence ‘Blacksboat’. 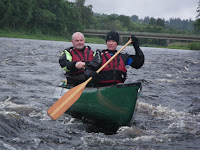 Soon we are paddling into beautiful Knockando Estate. Although the first Knockando fishing pool we come to has the slight less than attractive name of ~ ‘Slobs’ ~ no one has yet been able to tell me why! Then on our way through ‘Poolarder’ pool we encounter young Bill, the ghillie who taught Ewan Macgregor to cast (there must be a pun in their somewhere!) for his part in the lovely film ‘Salmon Fishing in the Yemen’. On by Stoney Island and we reach one of my favourite locations on the Spey ~ ‘The Pouches’. Having almost finished our trip for the day, my little team draw up on the bank beside ghillie’s fishing hut and I decide to reward my team ~ and my old friend Sandy the ghillie ~ with a dram of Handcrafted Speyside malt ~ Wm. Grant & Sons do it well!! A very fitting end to another fine trip on the beautiful River Spey ~ with star paddlers whose new found and well honed paddling skills will, I am sure, be of great assistance in the canoe-based river studies of the Spey Fishery Board. Many thanks for a great day on our wonderful river. 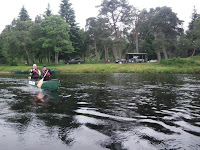