Somewhat later than I had hoped I now write to share the lovely day I we had on the Spey on Saturday April 21st with 12 great young gentlemen from London.

Most refer to them as Stag or Hen Parties. At Spirit of the Spey we tend to call them ‘Boysie Bondings’ or ‘Girlie Gatherings’. So this was young Mark’s pre-nuptial Boysie Bonding ~ a weekend filled with activity but with interludes of R&R and also time factored to eat nice food and sip the odd (mainly brown ~ how odd is that!?) ‘Lemonade’ or three!

The lads had travelled up to Aviemore from Kings Cross overnight Thursday on the sleeper-train. Upon arrival in Aviemore on Friday morning, they were picked up at Aviemore station and promptly whisked off by people-carrier on a visit to lovely Cragganmore Distillery, an experience thoroughly enjoyed by all.
The group of lads then returned to their comfortable accommodation ~ at a fine large house, ‘The Pines’, on the outskirts of Grantown-on-Spey. After settling in and a meal in the town, the group were treated to a tutored whisky-tasting session at The Pines. Six or eight drams (~ no one was quite sure of the exact number!) were sampled but most agreed that of the whiskies nosed and tasted throughout the evening, one Aberlour expression stood out as a favourite. 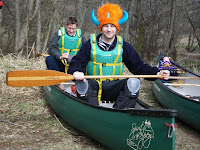 Shortly after nine o’clock the minibus picked up the group and delivered them to the riverbank at a point just downstream of Advie Bridge. Following issue of technical kit and brief skills input and safety briefing the group set off downstream.

The majestic Spey was particularly majestic as, following the massive snow melt and rain causing widespread throughout Strathspey earlier in the week, the water-levels were still 4 feet above normal summer levels ~ so to use the technical term ~ ‘stonking down’.

Some of the lads having previously been on the Ardeche in France, upon arrival, considered themselves competent paddlers but Lady Spey was keen to prove she was of a more playful, indeed devilish nature than any French ‘tourist river’. Realising that the skills taught on the shore were to be useful in getting them to their egress point and also heighten their enjoyment of the day, the boys all buckled down, honed their paddling techniques and team work to cope very well with the fast flowing currents. There were only three capsizes in the entire day and two these occurred by the riverbank ~ once when two lads were getting in and once again when the same lads were getting out of their canoe! 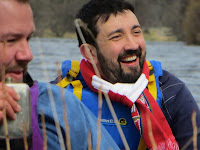 The weather on the day was not fantastic but, although overcast, the day was mainly dry and Lady Spey was, as always, looking radiant, at this time, in her early spring cloak, with a fresh green on the trees as buds start to swell prior to their bursting open in the next series of warm days. (Sadly we are still waiting!)

Our picture canvas was back-dropped by still snow lying white on the higher hills but the boys stayed warm togged up in their fleeces and waterproof shells. Mark (the groom to be) got off fairly lightly in terms of ‘clothing’ and paddled dressed by his ‘friends’ in a warm, woolly top and football scarf, dashing black tights and lovely kilt. 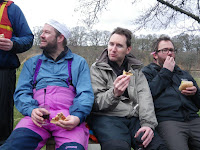 We had our tasty picnic-lunch just downstream of the infamous ‘Washing Machine’ rapid ~ which was fairly high and towards being washed-out. However the lads coped well with the heavier water. After lunch the boys played ‘Contact-Sports/Boysie Games’ 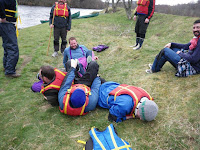 Likewise at the more technical Knockando Rapid, after a blether with Knockando senior ghillie, Sandy Smith the lads all came through the white water with big grins on their faces. (pic 048)
Dippers, wagtails and herons kept up company throughout the day. Because the water levels were high, fishing was not very good, thus many of the fishing guests had gone home and we saw very few anglers on our journey. (pic 055) 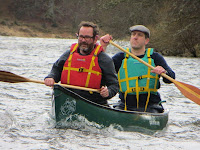 Very soon we were passing the site of the long-since mothballed
Imperial Distillery ~ now demolished to make way for the brand new state-of-the-art distillery to be built by Chivas Bros. Then we travelled round the bend to view the attractive steel construction of Carron Bridge ~ once carrying, side by side the road and the Speyside railway line.

Next bridge is the pretty Victorian pedestrian, Penny Bridge at Aberlour ~ built by James Fleming ~ founder of Aberlour distillery to benefit all resident of the area ~ except, that is, the previous ferryman! From this point of the river, one can view up ahead the modern bonded-warehouses of world-renowned The Macallan. 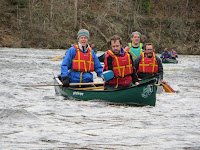 Then to our egress point by Thomas Telford’s lovely Bridge by Craigellachie. All the boys were on a high following their Spey Experience which was only made complete when they sampled a dram of some of Dufftown’s best ~ on this occasion a Balvenie Doublewood 12 yo.

The group were scooped-up and taken back to The Pines to freshen up and prepare for a delicious 5 course dinner prepared by local ‘master-chef’ Christina Blakeney, during and after which I understand the boys greatly aided the well-being of the wines and spirits industry. 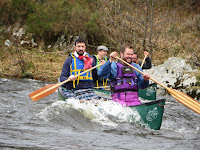 After a leisurely start to Sunday, the lads took in some fresh Grantown air and at the appointed time were driven back to Aviemore station for their return overnight to the Big Smoke ~ something of a contrast to their stay in Speyside.

Thanks to Jamie and Joe for setting up this Boysie Bonding weekend ~ enjoyed by all associated with it. This was a weekend of variety which will be remembered and spoken about for years to come. I wish Mark and his bride every happiness in their future together; they certain have a lovely group of ‘Boysie friends’surrounding them.

Thank you for taking the time to read this blog, if you are interested in Open Canoeing on the majestic River Spey, please make contact with Dave Craig of Spirit of the Spey to have a no-obligation chat.  Spey journeys can be from 1 day improver course to a 5 day Spey descent.

DANGER TO PADDLERS AT FESHIE BRIDGE ~ April to July 2013.

In the last couple of days, the wonderful Scottish snows of 2013 ~ until a couple of days ago forming a playground for skiers ~ has, in the sudden warm temperatures, quickly melted ~ the melt-water transforming Highland rivers into raging torrents.

For water-sporters who like their water shaken and stirred, once such river, with relatively easy access is the attractive, lively River Feshie ~ paddled by mainly acrobatic ‘play-boaters’ accessing by Achlean Croft and journeying on down to the Feshie’s confluence with the majestic Spey. 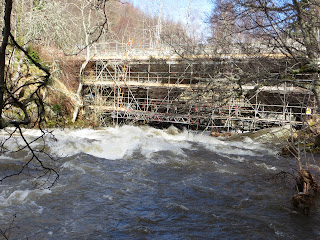 Included in the lower part of this section of this river is the very picturesque Feshie Bridge. Following recent surveys this historic stone bridge has been judged to be in serious need of immediate repair. The road has not been closed for ongoing work but rather, an intricate lacing of scaffolding has been erected on either side of the bridge causing no impediment to traffic.

However, the scaffolding poles, erected in recent weeks, when water-levels were unseasonally low, reach down almost to the ‘low-water mark’. Now that the Feshie is filled to torrent level with the melt-waters of the snows, the scaffolding metal-work, (including thick, horizontal poles) ~ at times under water, poses a lethal hazard to paddlers. 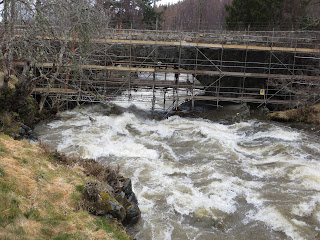 Paddlers looking to enjoy the Feshie, especially in these ideal conditions of swollen waters, are advised to avoid Feshie Bridge at all costs.

(Water-sporters should be aware that they are always welcome to access/egress the Feshie via grounds of (even stay at!) City of Edinburgh’s excellent outdoor centre ~ Lagganlia ~ http://www.lagganlia.com/
Posted by Dave Craig at 12:36 No comments: