Following on from its successful, highly acclaimed debut in 2012, The Whisky Stramash returned again to Edinburgh’s historic Surgeons’ Hall on May 25th & 26th.

Scott Martin who co-founded the event along with Darroch Ramsay said “We wanted to create an event with a difference ~ something that would excite whisky aficionados but also attract new drinkers’. And it certainly did that! Once again, in inventive and innovative ways, exhibitors at The Stramash brought the wonderful, indeed rapidly developing world of whisky, to experts and beginners alike.
There was a massive array of dream-drams on display and on offer for sampling! Harviestoun Brewery in celebrating its 30th Birthday, revealed its latest high strength brews, some matured in ex-whisky casks. 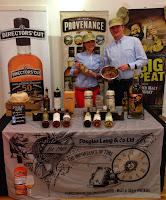 There were a number of interactive experiences. As well as an attractive but ‘static’ stand The Glenfiddich set up a replica Warehouse 47. Guided through this virtual-reality whisky experience by Glenfiddich UK Ambassador, Jamie Milne visitors to the event could imagine they had been transported to a distillery. A very real part of the experience, however, was when Big Jake ~ a master cooper of 29 years, based at Wm Grant’s Girvan plant, started hammering hard the hoops of a cask he had partially dismantled to rebuild for Stramash guests.
Meanwhile Burns Stewart distillers, took guests back in time with a Deanston Distillery vintage photo wall, dressing the visitors as distillery workers from bygone days, before their being brought forward to sample some exquisite 20th/21st Century expressions. 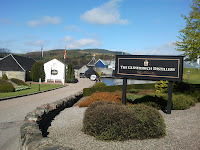 Douglas Laing and his pal Big Peat were there also, wooing visitors with smokey drams and tasty chocolate mousse laced with some of Big Peat’s own make.
The ‘Spirit of the Spey’ canoe/whisky stand was sandwiched between the two latter distillers of distinction ~ Douglas Laing and Burns Stewart. With two 4-hour sessions on Saturday and another from 1pm till 4pm on Sunday our exhibit went like a fair. Once the doors opened to the public we were inundated with folks with a thirst to know more about whisky and also to learn of canoe journeys on the majestic River Spey ~ 1-Day Coaching tips to 5 day canoe/whisky journeys, with distillery visit and whisky tastings, staying en route in lovely hotels. 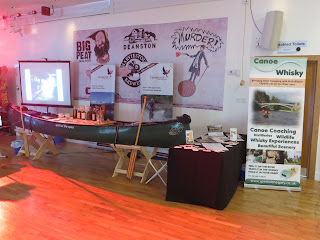 Malts we had on offer for visitors to sample at the ‘Spirit of the Spey’ stand, included ~ the new, highly acclaimed Balvenie Doublewood 17yo; the very fine 15yo Glenfiddich Distillery Edition ~ non-chill filtered and bottled at 51% proof. However, most popular from our selection by a long–shot was the Balvenie Caribbean Cask ~ 14 years in a first-fill bourbon cask and finished in a virgin European oak, which David Stewart, malt-master extraordinaire, has previously carefully seasoned for 4 years with 3 selected Caribbean rums. Introduced to the Balvenie core range and launched to the world during a journalist canoe trip on the Spey in September 2012, this exquisite expression, smooth on the palate, bursting with exotic fruits and warm, lingering after-taste will, I confidently predict, become one of the most highly acclaimed off-the-shelf malts in the entire history of Wm Grant & Sons whisky-making. 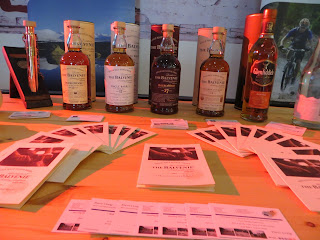 The Edinburgh Whisky Stramash 2013 was a great, energy filled event filled with fun and friendship and a lot of great whiskies to be sampled and savoured. Well done to organisers, especially Darroch and Scott, Many thanks to them for their help but also colleagues from within the whisky industry who supported me with advice and stock for this most excellent event. Special thanks go too to my two great pals, Willie and Nick who gave up their entire weekend to work tirelessly on my busy ‘Spirit of the Spey’ stand. I couldn’t have done it without you guys!